You are here: Home / Inspiration / The importance of rituals vs. routines 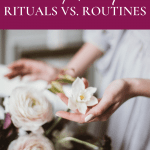 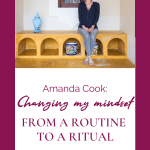 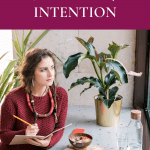 “Routines” have such a negative connotation. Sure, they’re great for productivity – they put you on autopilot so you get stuff done. But who wants to go through life on routines? It makes life sound so dull, so typical, so uninspired and grey.

A concept I’ve been exploring for myself is the difference between rituals and routines.

In one sense they’re very similar – something that you do over and over, the same way.  So, what the difference between a routine and a ritual? Intention.

The major difference between routine and ritual, as I see it, is the meaning you attach to the series of steps.

Let’s see how this might work in real life.

One thing I’ve been experimenting with is my morning routine. (Ahem, morning ritual.) I’ve always been big on eating breakfast, so I’ve always woken up, eaten breakfast, showered, and gotten started with my day. Sometimes I felt rushed and like I didn’t have enough time in the morning. Sometimes I felt guilty that I was taking so much time in the morning, when friends could get out the door in 15 minutes. But most of the time, I didn’t think about my morning routine, it was just something I did.

A few months ago, some reading inspired me to think of my morning activities not as a routine, but as a ritual.

Immediately my perception of my morning activities changed. Instead of the daily grind, it was me-time. It was a series of actions I was doing, consciously, to take care of myself.

Changing my mindset from a routine to a ritual took no extra time in the morning. But I get a lot more out of the experience. I’m actually aware during the process (well, most mornings) and I feel like I’m doing something good for myself.

As a side benefit, I’ve noticed it’s lead me to make healthier choices at breakfast, because I’m not just seeing it as a grab-and-go meal, but rather, an opportunity to do something good for my body.

Do you have any rituals? Do you have a daily routine that you could turn into a ritual? Try it for a week and let me know what you find.