Mark Sisson is the founder of Mark’s Daily Apple, one of the most well-known paleo/primal living websites. I first met Mark at a conference several years ago, when my blog was more a labor of love than a business. We talked about how “a blog is not a business” – and I wanted to continue and expand on that conversation today.  Especially since Mark’s blog/website is a cornerstone of his ever-growing business empire which includes supplements, live events, and a publishing company!

One of my favorite moments in this interview is when Mark shared that he “didn’t know what he wanted to do with his life until his mid-40s” – and then shared some advice that he’d give to his younger self.

For all of us who feel that confusion about what we really want to do when we grow up – or that success is just not happening fast enough!!! (Can you relate?) I think you’ll enjoy what Mark has to say.  I know it was exactly what I needed to hear at that moment!

Plus, we talk about tons of specific business-building tips especially for online entrepreneurs, and a good dose of entrepreneurial mindset.   Get ready to be inspired, it’s a good one.

What you’ll learn in this episode: 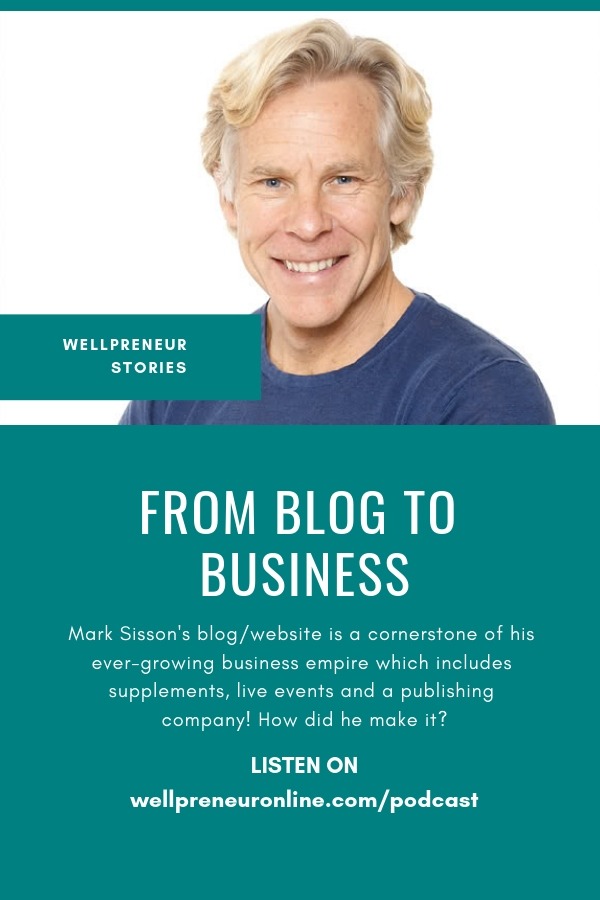 It’s never too late to find your calling Transcript

Amanda: Hello, and welcome to another episode of the Wellpreneur online podcast. This week is very exciting because I have on the show Mark Sisson from Mark’s Daily Apple. You must know Mark’s Daily Apple if you’re involved at all in the paleo or primal space. His site’s been around since 2006 and it’s just so well-researched and it’s just a massive treasure trove of information about how to adopt a paleo lifestyle.And what I also love about Mark’s business is it’s a really great example of what you can do with an information marketing business. So, he’s diversified into lots of different types of products. Besides the blog, he’s got a podcast, he’s got a very active online forum.He writes books, he’s basically started a publishing company that he talks about, and he also runs in-person events as well as selling supplements. So, it just shows you that with an online platform, you can really develop your business in a lot of different directions that make sense for you.So, I first met Mark several years ago in an event while I was still going through my health coach training, at an event in California, and we talked then about how a blog isn’t a business. And we really continue on with that conversation today in the fact that developing the online platform is important because that gives you your audience.But actually, you’ve still got to be a business, and really, you’ve got to approach your online business just like you would any business; making sure you’re really passionate about it, you’re in it for the long haul, you see a clear need and that you’ve got products and services that people want to buy.So in our conversation today, Mark really digs into his background of how he built Mark’s Daily Apple, when he was one of the very first paleo or primal sites on the internet, and now he’s built it into this massive organization with employees. He’ll talk a bit about what his company looks like today, which is pretty neat. And we’ll also talk about some of the common pitfalls that he sees from people that are starting businesses, what he would recommend to people just starting out, and he also shares the advice that he would give himself if he could go back in time and talk to himself and he was just starting with Mark’s Daily Apple. And I think you’ll really like that advice. I know I found it very reassuring, and positive, and optimistic, and exactly what I needed to hear at this time. So, I’m really thankful to Mark for sharing, sharing your opinion about that and your wisdom from what you’ve learned, because I think it’s something that will… I know it helped me and it will help a lot of people out there. Now, before we jump into this interview with Mark Sisson, I just want to let you know what’s going on back at WellpreneurOnline.com. Because this week, I’ve got some super valuable free training available on my site that’s time-limited. It’s only going to be around for another couple of weeks. And this training is all about building your email list and specifically finding your first 100 fans for your business. So, if you are in a position that you don’t have a lot of people on your email list, maybe you don’t even have an email list; you’re just getting started. Even if you don’t have a website, you can start building your email list and I’m going to explain how you can do that. So, please pop over and watch my free training. It’s at WellpreneurOnline.com/findyourfans. So, if you just go there, you’ll be able to sign up to get access to this free training while it’s available. So without waiting any longer, let’s go over to the interview with Mark.
[INTRO END]

Amanda: Thanks so much for listening to this interview. I hope that you enjoyed that as much as I did, and especially Mark’s advice to himself. I thought that was really just exactly what a lot of us needed to hear. So, thanks Mark for sharing that. Now, you can get all of the resources and links that we talked about in the show notes which is at WellpreneurOnline.com/15.
And don’t forget that this week, I’ve got free video training available on my website that’s time-limited. And it’s all about how to build your e-mail list. So, if you’re just getting started with your business or if you’ve got an email list with not very many subscribers, please jump over and watch my training. It’s at WellpreneurOnline.com/findyourfans.
Thanks so much for listening to this episode and I’ll see you back here next week.
[OUTRO END]

Start Your Wellness Business -
from Scratch!

Get our free 9-page checklist so you know exactly what to do first and where to focus when starting a wellness business.